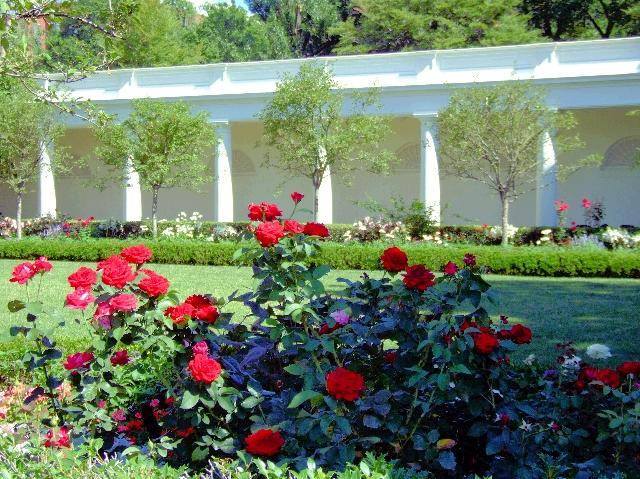 Come follow the Lion of the Tribe of Judah into the Rose Garden. Notice the wind blowing these mystical roses in a specific pattern. The sound is first felt; then heard. These roses bow as the King passes and sway to the music. As we begin to ascend up the fragrant trellises of roses, a heavenly voice tells us: “In this place, there is healing for the nation” and we see the White House Rose Garden that goes back generations. Heavenly golden trumpets announce the transformation for the United States of America and for other nations. A shofar blows calling past generations and drenching people in a fresh anointing oil, which is essence of the rose and synonymous with the oil of unity that ran down Aaron’s beard (Psalm 133).

Wine is pouring out the heads of the living roses that spiral with the message: “I am the Alpha and the Omega, the First and the Last.” We are instructed to lie down to saturate ourselves in this wine of unity. As we recline, we are transported to the Rose Garden at the White House. An ancient waltz plays, as we dance in the White House with the King on its floor drenched with the Blood of the Lamb. We know that all authority has been given to Jesus by the Father, as we waltz in the blood of our Savior. Yeshua piercing and determined eyes speak: “This is My White House,” and we see the first five president of the United States of America levitating above us. We invite George Washington, John Adams, Thomas Jefferson, James Madison, and James Monroe to join us through communion for the Rose Garden Restoration. Huge guardian angels accompany these presidents as well as a plethora of hosts of heaven, including the Great Cloud of Witnesses who have prayed and stood for the United States of America.

As one with the five presidents, we open an ancient portal in the Rose Garden with the golden military swords of these generals. We are instructed to throw in five scrolls of destiny:

[1] MAGNA CARTA – Establishing the principal that no one, including the king or lawmakers, is above the law. We throw in the first five book of the Bible along with the Magna Carta.

[2] CONSTITUTION – Preamble states: “We the People of the United States, in Order to form a more perfect union, establish justice, insure domestic tranquility, provide for the common defense, promote the general welfare, and secure the blessings of liberty to ourselves and our posterity, do ordain and establish this Constitution for the United States of America.

[3] DECLARATION OF INDEPENDENCE– Preamble, plus first section states: “When in the Course of human events, it becomes necessary for one people to dissolve the political bands which have connected them with another, and to assume among the powers of the earth, the separate and equal station to which the Laws of Nature and of Nature’s God entitle them, a decent respect to the opinions of mankind requires that they should declare the causes which impel them to the separation. We hold these truths to be self-evident, that all men are created equal, that they are endowed by their Creator with certain unalienable Rights, that among these are Life, Liberty and the pursuit of Happiness.–That to secure these rights, Governments are instituted among Men, deriving their just powers from the consent of the governed, — That whenever any Form of Government becomes destructive of these ends, it is the Right of the People to alter or to abolish it, and to institute new Government, laying its foundation on such principles and organizing its powers in such form, as to them shall seem most likely to effect their Safety and Happiness. Prudence, indeed, will dictate that Governments long established should not be changed for light and transient causes; and accordingly all experience hath shewn, that mankind are more disposed to suffer, while evils are sufferable, than to right themselves by abolishing the forms to which they are accustomed. But when a long train of abuses and usurpations, pursuing invariably the same Object evinces a design to reduce them under absolute Despotism, it is their right, it is their duty, to throw off such Government, and to provide new Guards for their future security.– Such has been the patient sufferance of these Colonies; and such is now the necessity which constrains them to alter their former Systems of Government. The history of the present King of Great Britain is a history of repeated injuries and usurpations, all having in direct object the establishment of an absolute Tyranny over these States. To prove this, let Facts be submitted to a candid world.”

[4] MONROE DOCTRINE – Defining moment in the foreign policy for the United States and one of its longest-standing tenets. The doctrine asserted that the New World and the Old World were to remain distinctly separate spheres of influence, for they were composed of entirely separate and independent nations.

• AMENDMENT I – Congress shall make no law respecting an establishment of religion, or prohibiting the free exercise thereof; or abridging the freedom of speech, or of the press; or the right of the people peaceably to assemble, and to petition the government for a redress of grievances.

• AMENDMENT II – A well regulated militia, being necessary to the security of a free state, the right of the people to keep and bear arms, shall not be infringed.

• AMENDMENT III – No soldier shall, in time of peace be quartered in any house, without the consent of the owner, nor in time of war, but in a manner to be prescribed by law.

• AMENDMENT IV – The right of the people to be secure in their persons, houses, papers, and effects, against unreasonable searches and seizures, shall not be violated, and no warrants shall issue, but upon probable cause, supported by oath or affirmation, and particularly describing the place to be searched, and the persons or things to be seized.

• AMENDMENT V – No person shall be held to answer for a capital, or otherwise infamous crime, unless on a presentment or indictment of a grand jury, except in cases arising in the land or naval forces, or in the militia, when in actual service in time of war or public danger; nor shall any person be subject for the same offense to be twice put in jeopardy of life or limb; nor shall be compelled in any criminal case to be a witness against himself, nor be deprived of life, liberty, or property, without due process of law; nor shall private property be taken for public use, without just compensation.

• AMENDMENT VI – In all criminal prosecutions, the accused shall enjoy the right to a speedy and public trial, by an impartial jury of the state and district wherein the crime shall have been committed, which district shall have been previously ascertained by law, and to be informed of the nature and cause of the accusation; to be confronted with the witnesses against him; to have compulsory process for obtaining witnesses in his favor, and to have the assistance of counsel for his defense.

• AMENDMENT VII – In suits at common law, where the value in controversy shall exceed twenty dollars, the right of trial by jury shall be preserved, and no fact tried by a jury, shall be otherwise reexamined in any court of the United States, than according to the rules of the common law.

• AMENDMENT VIII – Excessive bail shall not be required, nor excessive fines imposed, nor cruel and unusual punishments inflicted.

• AMENDMENT IX – The enumeration in the Constitution, of certain rights, shall not be construed to deny or disparage others retained by the people.

• AMENDMENT X – The powers not delegated to the United States by the Constitution, nor prohibited by it to the states, are reserved to the states respectively, or to the people.

When the five scrolls are put into the heaven-and-earth portal in the Rose Garden, a floodgate of heaven opens that releases the rose wine in this garden. His wine of priestly unity flows into the grounds of the White House, into Washington D.C., into the nation, and into the uttermost parts of the earth. His wine of unity saturates the whole world.

A glimpse of a Mystic Mentoring (in Christ) Group Ascension
www.sapphirethroneministries.com
www.santa-tizing.com
www.mysticmentoring.com

Written August 5, 2015 – Sapphire Throne Ministries – Robin Main. Copyrighted – If you are going to copy this, please copy it right by giving attributions to this source.