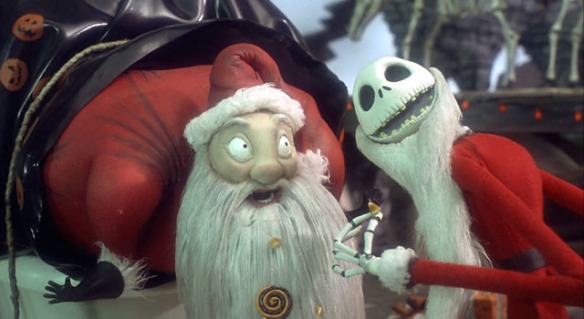 In 2005, a Wisconsin elementary school secularized the lyrics to “Silent Night” and added La Befana, the Christmas Witch, to their classroom decorations. Christians may like to believe that the Christmas Witch rides her broom delivering toys to bad little boys and girls, like some sort of Anti-Santa; but then again her name means “the epiphany.” In Italy, the Christmas Witch is said to make perfect sense because she used to deliver presents in Italian children’s stockings on the day of Epiphany, January 6, which is the day that the Catholic church speciously instituted as the celebration of the arrival of the wise men in Bethlehem. Just think, anyone can purchase an old world ornament of a Christmas witch with a cauldron from the Noel Christmas Store’s website. If that doesn’t strike your fancy, how about a black bat, an evil eye, or a devil’s head decoration for your tree?

For many moons now, I’ve noticed that Christmas merchandise has been mixed with Halloween paraphernalia in most stores. Spiritually speaking, this gives us a clue. For several years, I drove past a local psychic’s storefront every day on my way to and from school. As I prayed for her one day, the Lord told me to pay attention to how she decorates for the holidays. I was amazed that Psychic Kay decorated more for Christmas than for Halloween, followed by every major holiday except Thanksgiving. My observations remarkably coincide with Disneyland’s Haunted Mansion’s Nightmare Before Christmas ride, which cleverly combines Christmas and Halloween.

Nimrod spearheaded mixing the sacred with the profane. He was the mighty leader who first institutionalized idolatry; but it would have been very difficult to introduce and promulgate idolatry in one fell swoop due to the flood still being fresh in the people’s minds. Nimrod’s generation had living testimonies among them, because Noah and many of his descendants were still alive.

To mix something means to combine or blend two different elements into one mass. At Christmastime, commerce and religion are commingled, which is not always a bad combination; but the co-mingling of worship and entertainment—the sacred and the sensual—is. My Webster’s Collegiate Dictionary also defines the word mix as crossbreeding, which results in a hybrid. It’s an offspring of two different genera that involves crossing two different breeds. In Nimrod’s case he mixed the truths of God’s sacred kingdom with the lies of Satan’s demonic one.

Chaldea was an ancient city in the southern region of the Persian Gulf’s Babylonia that came to be considered as Babylon. For clarity sake, one can substitute “Chaldea” for “Babylonia” or “Babylon” when we read Scripture; but when the Bible designates “Chaldea,” it is more precisely pointing out the place where sorcery, sun god worship and its associated “land of merchants” status originated (Jer. 50:10; 51:24; Ezek. 16:29; 23:15).

Let’s look closer at Chaldea not only being the seat of earliest sun worship, but it was also the primordial center of sorcery: “For all the nations were deceived by your sorcery” (Rev. 18:23 NASB). The definition for sorcery to which I will be referring is stated in The Prophet’s Dictionary: “The practice of manipulating creation, humans, or events to provoke manifestations of what is desired by the occultist.”

The title “Chaldeans” was used for Babylonian experts in divination and magic, and its label goes way back to early Babylonia, if not further. They were the highest priestly caste of the ancient pagan world. Their superior occultic powers and mysterious knowledge were famous throughout the ancient world. Chaldeans were renowned for sophisticated systems of divination; they used various manipulative means of accessing supernatural knowledge, like: omens, augury, dream interpretation, spell binding and casting, horoscopy, and sorcery. “Magic was their main divinatory tool. The Chaldean mindset was set toward nature worship. How it operated and its times and seasons of operation were essential to the success of their magic formulae.”

“Magic includes sorcery, witchcraft, incantations, enchantments, wizardry, spells and spell casting, and demonism of all kinds.” During the 2007 Christmas season, the ABC Family TV channel kicked off its twenty-five days of Christmas with three Harry Potter movies. The first one was entitled: Harry Potter and Sorcerer’s Stone. It was advertised as the magic of Christmas.

Practitioners of magic claim that there are two types: white magic and black magic. White magic is supposed to be harmless, while black magic is harmful. Harmless white magic seems to coincide with little white lies, like: Old St. Nick putting his finger to the side of his nose and up the chimney he goes, or Santa knowing who is naughty or nice, or his eight flying reindeer. On the surface white magic appears innocent (even though they are lies) until one realizes that the operation and object of the two are essentially the same. The only difference is the varying degrees of manipulation for both aims at using the supernatural for purely selfish reasons. Their object is to use people. Their operation takes what is not given to conjure up what is not earned. They seek to influence a person through oppressive or coercive actions, and for this reason alone, magic can be classified as harmful to those controlled.

Written October 22, 2017 – Sapphire Throne Ministries – Robin Main. Copyrighted – If you are going to copy this, please copy it right by giving attributions to this source.

• CHRISTIAN RECOGNITION OF THE PAGANISM OF CHRISTMAS => http://wp.me/p158HG-DB

• SANTA-TIZING #2 – WHERE CHRISTMAS COMES FROM => https://www.youtube.com/watch?v=INypfLsTaPw

PHOTO: Scene from the film: The Nightmare Before Christmas movie