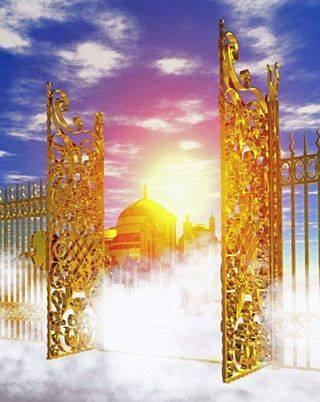 An Ancient Golden Gate of Thanksgiving and Awe has been prepared for this special season of lights, miracles and dedicating our temples to walk as Yeshua (Jesus) did. For those who choose to enter into Chanukah, there’s a greater grace given to become one with Him, as His pure and spotless Bride, as well as it being a door to a life that’s full of signs, wonders and miracles. If you need a creative miracle, it can be found in the Winter One-dear-land where Yeshua walked in Solomon’s Colonnade.

The name “Feast of Miracles” is another term for Chanukah. When anyone asks why a Christian would celebrate Chanukah, the simplest and most direct answer is that Yeshua did. “Jesus gave them this answer: ‘I tell you the truth, the Son can do nothing by Himself; he can do only what He sees His Father doing, because whatever the Father does the Son also does’” (John 5:19). So when Yeshua celebrated Chanukah on earth, significantly, His Heavenly Father participated also. Stop and really think about that. Our precious Heavenly Father not only approved of Chanukah, but joined in the festivities. In fact, the days of Chanukah were designated as festivals of praise and thanksgiving, because the His people recognized the annual return of the same kind of spiritual force that resulted in the original miracle.

Jesus walked in Solomon’s Colonnade during the feast of Chanukah declaring His miraculous works plainly revealed that He was the Messiah. Israel’s priests had previously concluded that when they heard the testimony of someone being healed of the incurable disease of leprosy, it would be an obvious sign of the Messiah… that He had come. And not only that, but the Messiah would also restore the sight of someone born blind. The lame born lame would walk. When John the Baptist asked Jesus: Are you the One? Yeshua sent back the message: Tell John the blind see, the leper is cleansed, the lame walk and the captives are set free (Matthew 11:4-5). These and even greater works believers are still called to do.

How many of these miracles happen today? How many have you personally seen? DID YOU KNOW THAT THE CHURCH, UNIVERSALLY, WAS A SUPERNATURAL COMMUNITY PRIOR TO THE PAGAN FEAST BEING INTEGRATED INTO THE CHURCH’S CALENDAR? We’ll go into how the assimilation of pagan feasts mixed the holy with the profane in God’s eyes and moved His manifest dwelling presence (evidenced by miracles) from His Sanctuary in a future post. For now, simply note that the first recorded evidence of Christmas actually taking place on December 25th isn’t found until the time of Constantine in 336 A.D.

For the first 300 years, nothing resembling Christmas existed in the Christian Church’s calendar. The Church followed the pattern established by the apostles. They experienced a life and a power the world could not comprehend. Christ’s Church, in its primal form, celebrated the Lord’s Feasts. Daily, even several times a day, miracles occurred. Jesus set precedence when He walked in Solomon’s Colonnade during the Feast of Miracles declaring the miracles done by God’s kingdom had come upon them.

Significantly, Solomon’s Colonnade was not only the place associated with miracles, but it was also the place ALL the believers met (Acts 5:12). It’s the place where His apostles performed many miracles, signs, and wonders among the people (Acts 3:11); but one might miss this fact, because Solomon’s Colonnade was on the east side of God’s Temple and sometimes the writers of Scripture referred to the Eastern Gate instead of Solomon’s Colonnade. Just like Chanukah, the Eastern Gate of Jerusalem has three names: [1] Eastern Gate, [2] Beautiful Gate, and [3] Golden Gate. This is the place where Yeshua returns: “For just as the lightning come from the east, and flashes even to the west, so shall the coming of the Son of Man be (Matt. 24:27 NASB). I believe this is a picture for us now spiritually with a future physical manifestation of Yeshua returning as well.

Recall that there’s a flaming sword, which turns every which way, to keep the way to the Tree of Life (Gen. 3:24). The flame of the sword alludes to lightning coming from the east and from His throne (Rev. 4:5). This flaming sword is the All-Consuming Fire who’s name is the Word of God that is truly able to as judge the thoughts and intents of our heart (Heb. 4:12).

Now is the time to open up our ancient golden gates, so the King of Glory can come in (Psa. 24:7). This is the Kingdom Day to worship God His way. This is the Kingdom Day where His set apart people will cleanse their temples, and will operate in signs, wonders and miracles as a result. God’s people need to first deal with the mixture that was brought into the church that cut it off from its holy and pure connection to its power supply. If you want to be part of His pure and spotless Bride and operate in her naturally supernatural state, you will have to pass through His gateway of awe that rids us of all mixture in His sight.

Written November 30, 2013 – Sapphire Throne Ministries – Robin Main. Copyrighted – If you are going to copy this, please copy it right by giving attributions to this source.

Solomon’s Colonnade is also called Solomon’s Porch. It was built by Solomon on the east side of the temple. From this side, the glory is supposed to fill God’s temple. A porch or portico is a covered area adjoining an entrance to a building and usually has a separate roof. Spiritually speaking, it represents the place where a believer already has entered the temple (i.e., a relationship with God), but not the building (i.e., become a permanent dwelling place for God). I believe that the celebration of Chanukah holds several keys for end-time believers.

Chanukah is celebrated in winter when things look asleep, just as all ten virgins in Matthew 25 were asleep because “the Bridegroom was a long time in coming” (Matt. 25:5). By the way, both the wise and foolish virgins are representative of believers.

DISCUSSION: Please select how you’d like to involve others (there’s freedom to do whatever the Spirit leads):

[1] Discuss what it means to walk with Yeshua in Solomon’s Colonnade in the winter.

[2] How would you like to see miracles manifest through Christ in you?

[3] What are your thought about Solomon’s Colonnade being the place where all believers meet?

If you’d like to learn a little more about HIS WINTER ONE-DER-LAND, please refer to: