My heart grieves; because I have witnessed this past holiday season a great number of people who love God dearly who are either unwilling or unable to look at the mixture involved in celebrating Christmas. I too see and have warned in my “THIS IS CHRISTMAS” series of articles (see below) that people who hold onto idols will be on the short end of the stick when it comes to the contrast between those who are IN CHRIST and those who are not. Yeshua can not, and will not, join Himself to idols, and Christmas is the Granddaddy of them all – literally being made in the exact same image as the Golden Calf that Aaron built (Refer to http://wp.me/p158HG-2m and http://wp.me/p158HG-kH ).

This is a year that everyone will know where they stand in relation to being IN CHRIST. I again use Wendy Christie’s words in this regard: “There will be a great contrast between those who are IN CHRIST and those who are not. This is so ALL can SEE right where they stand and have a chance to REPENT. Make no mistake about it. This is an act of God’s mercy. On one hand you will SEE judgment and on the other justice. On one hand you will SEE chaos and on the other the ORDER of God. On one hand you will SEE condemnation and on the other great blessing.” If there appears to be judgment from the Lord, chaos or condemnation in your life, turn to Him and repent; because it’s His mercy that is showing you the reality of your life’s choices. The shaking will not let up until you turn to Him with your whole heart, soul, mind and strength, because of His great love for you.

“So let no one judge you in food or in drink, or regarding a festival or a new moon or sabbaths, which are a shadow of things to come, but the substance is of Christ.” (Colossians 2:16-17 NKJV).

It’s ironic that Christian theologians have used Colossians 2:16-17 to justify mixing holy things with the unholy, because within this very chapter it spells out two critical components to dwelling in No Man’s Land. BTW – No Man’s Land is the place where people daily yield to His crucifixion process, which causes one’s Kingdom of Self to disappear so the Kingdom of God can appear within and without:

[1] In No Man’s Land, Crucified Ones will NOT allow themselves to be diverted, deceived, or beguiled from receiving their eternal rewards to the satisfaction of the flesh (Colossians 2:18, 23).

[2] In No Man’s Land, Crucified Ones rightly judge (open the Door of Life) to the Lord’s marks in time, so that Christ’s Body can connect to their mature Head, who is casting the shadow.

We need to look with fresh eyes at whether Colossians 2:16-17 gives Christians a plausible reason to no longer exclusively celebrate the Lord’s Feasts. We are told that the marks of time that the Lord Himself put in place to set His people’s years, months and weeks – festivals, new moons and sabbaths – are but a shadow of things to come and their substance are found in the Messiah. Yeshua is the substance; but we must comprehend that a shadow always resembles its substance. When Scripture says something is a shadow of things to come, it means that we will be answering to the Creator who is casting the shadow.

We don’t have to guess what Yeshua’s substance is. Scripture tells us that His Name is “The Word of God” (Revelation 19:13). The substance of the Lord’s celebrations is found in the Messiah, and it lines up with what’s articulated in His Word. “These are a shadow of the things that were to come; the reality, however, is found IN CHRIST” (Colossians 2:17 NIV). Yeshua – the Head – and His Body are suppose to be the substance – the living breathing reality of His festivals, new moons and sabbaths.

Believers are not told to not celebrate the Lord’s Feasts in Colossians 2:16-17, but to not let anyone judge us in regard to them, which means people should not criticize, censure, condemn. or punish other people for the way they feel led to celebrate a Biblical Festival, a New Moon celebration, or a Sabbath because all of us are answering to the One casting the shadow. There is an assumption in the statement “Don’t let anyone judge you” that the Lord’s people are already eating, drinking and celebrating things His way. It’s similar to when God states in Matthew 6 “when you give to the needy,” “when you pray,” and “when you fast;” the Lord is assuming that His people are already giving, praying and fasting.

Colossians 2:6-12 speaks of how those who walk IN CHRIST dwell in the fullness of Christ bodily. The growth process for His Crucified Ones requires that we not only take up our cross daily, but we also follow the Messiah in all three of His baptisms (Matthew 3:11) , so we can rise with Him having put off the body of sins of the flesh.

• God’s people can be beguiled through a voluntary submission to another gospel and the worshipping of angels (Colossians 2:18). To be beguiled is to be deceived or hoodwinked, especially by something that appears to be agreeable. It’s something that engages your interest by deceitful cunning, duplicity, and trickery. So you tell me: Are Christians supposed to be ignorant of the fact that Satanists know that Santa is an anagram for Satan, and some of their clubs even use a Santa with a cigar to mark their meeting places? Satan (aka Santa) is the personification of the fallen angel Lucifer (Revelation 12:9) whom even God’s people worship when we voluntarily submit to following the ways of the world and we worship Jesus according to what the world tells us to do to rather that His word.

• God’s people can be deceived by being vainly puffed up by their fleshly mind (Colossians 2:18). How many Christian minds are vainly puffed up by their fleshly mind thinking they know what’s better than what’s been spelled out in Scripture? It’s a question that demands a verdict in this hour, because God’s mercy is going to be showing each one of His people which side of the Christmas divide they are on. Your life will reveal whether you are IN CHRIST or not? If things are a shaking, please turn to Him.

• God’s people are supposed to be dead with Christ from the sensual requirements of the world and satisfaction of their flesh (Colossians 2:20-23). So why do we do submit to what the world tells us to do to celebrate Yeshua (Jesus)? Why do we put up those originally pagan Christmas trees, lights, etc? Why do we choose by our own will to worship after the traditions of man? Christmas feeds our senses and feels oh so good. “This wisdom does not descend from above, but is earthly, sensual, demonic” (James 3:15 NKJV). Are we called to enter into the same Spirit of Christmas, but believe that the Christian version is better and sanitized, even though history can trace Christmas’s root to Babylon and 95-96% of the world participates in Christmas? God’s Word says, “No.”

Please be a Berean, and search this out yourself! Get out your Bible and get into your prayer closet. And if you need some assistance in evaluating Christmas according to History and His Word, my blog http://santatizing.wordpress.com/ is a result of over 15 years of research as I genuinely searched for His Truth after three epiphaneous appearances from Yeshua.

Colossians 2:23 says that the fleshly worship that we voluntarily choose to participate in neglects the Messiah’s Body, because these seemingly innocent things cause His people to NOT hold fast to the Head – Christ. They also cause His Body to NOT be joined and knitted together in love due to His people walking and sowing to their flesh rather than to Spirit of the Living God (Rom 8:1,4-5; Col 2:19,23; Eph 4:15-16).

I heard: “This is your year. All that I’ve placed within you will be made know this year. This is a year to hold fast to the Head — the Messiah (Christ).” Let it be so.

The purpose of exploring the darker side of Christmas in the “THIS IS CHRISTMAS” series has been to expose its mixture and its origins in Babylon: 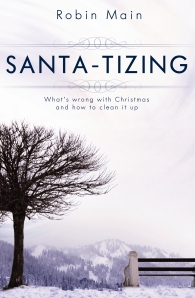 More historically and scripturally accurate information about Christmas can be found in my book: SANTA-TIZING: What’s wrong with Christmas and how to clean it up (available on amazon http://www.amazon.com/SANTA-TIZING-Whats-wrong-Christmas-clean/dp/1607911159).
.
*****